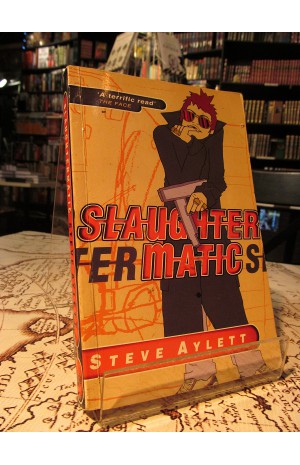 Synopsis:
Set in the blood-drenched chaos of Beerlight, "a blown circuit, where to kill a man was less a murder than a mannerism, " Dante Cubit and his pill-popping sidekick, the Entropy Kid, waltz into First National Bank with some serious attitude and a couple of snub guns. Murderous, trigger-happy cops, led by the doughnut-chomping redneck police chief, arrive in force, firing indiscriminately into the crowd gathered outside. Surrender or capture is out of the question. Dante’s beloved, the murderous assassin Rosa Control — packing a not-so-small arsenal — prowls the streets, trying to engineer her man’s escape. Will Dante slip past the forces of corruption and disorder to join his Rosa? What happens next is a tangled mess of reality and virtual reality.

Review:
Steve Aylett’s Slaughtermatic is enacted in a parodic, cyberpunk world in which crime has become an individualistic and self-evolutionary art. Dante, the protagonist, plans to rob a bank with the he
Рекомендуемые товары